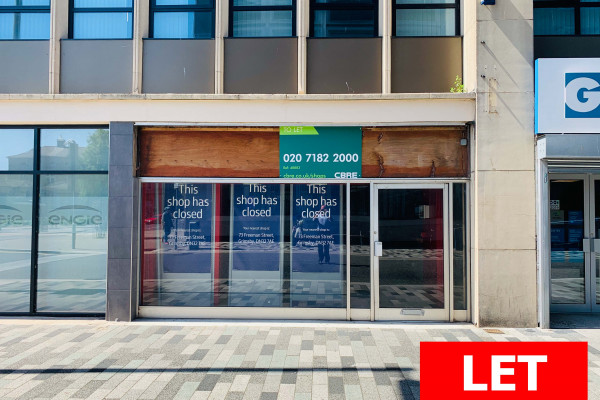 The town of Grimsby is located within North East Lincolnshire and has a population of approximately 88,250 (Source: Census 2011).  The property is situated on George Street, which forms part of the southern boundary of Grimsby town centre and adjoins the eastern end of the prime retailing pitch of Victoria Street a short distance to the north.  George Street additionally forms the primary vehicular entrance to the central bus depot and as a result, the premises benefit from high levels of passing traffic.

The property comprises flexible retail premises, within a larger building, which were most recently occupied by William Hill bookmakers.  The unit could provide open plan accommodation, benefitting from full-width display windows with an internal roller shutter, but have been split to provide a retailing area to the front and ancillary accommodation to the rear, including an accessible WC, stores and various staff facilities.

Nearby occupiers include GI Group, Grimsby Library, Engie and The Tanning Club, in addition to a variety of other local, regional and national retailers.

In more detail the accommodation comprises

The premises are offered To Let for a minimum term of years to be agreed on an effective full repairing and insuring basis at a guide rent of £15,000 per annum.

The new occupier will be responsible for the payment of Business Rates at the property.  The premises are listed within the Rating List as ‘Shop & Premises’ with a Rateable Value of £12,500 (Source: VOA website), although the premises will require reassessment should a change of use take place.

The new occupier may be eligible for an element of Small Business Rates Relief, but should make contact with North East Lincolnshire Council for confirmation.

The ingoing Tenant will be responsible for all parties reasonable legal fees incurred in this transaction, together with any Stamp Duty Land Tax that may be payable.

FURTHER INFORMATION AND TO VIEW